Moldavite is a very popular stone among witches, mystics and healers. It is considered a high vibrational stone, so much in fact that the term “Moldavite Flush” was coined for the experience of the energetic warmth that tends to flood many people when holding it. The stone today is believed to enhance psychic and healing abilities, give access to the Akashic Records, accelerate the personal evolution of the light body, induces astral projection and shamanic journeying and open one up to higher levels of compassion. Moldavite is believed to stimulate all the chakras, with particular focus on the heart chakra. Just as moldavite is the union of heaven and earth, so is the heart chakra the union of higher and lower chakras. However, it has a rich history in occult lore that many are unaware of.

Something to keep in mind when exploring Celtic Gods and Goddesses family trees is the people who called themselves or where given the name Celtic in later years come from a wide variety of places stretching from Turkey to Germany and onto the what is now known as the British Isles (Wales, Ireland, England, and Scotland). Each of these tribes had a few of the same deities but known y different names and some of the Celtic deities were now only in a specific region. So I will present to you here a few of the better know pantheons and give you the links to where I found the pictures of the family trees so you can explore further on your own.

Here is one version of the Celtic Deity family tree: 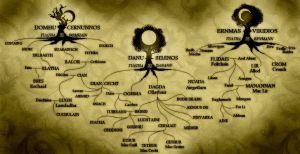 Here is a link to images on bing.com of other Celtic deity family trees for you to check out: Celtic Deity Family Trees

his is a brief overview of the Celts and their spiritual beliefs.  Most people think of Ireland when they hear the word “Celtic”.  However, the Celts were groups of tribal people who inhabited not only Ireland, Wales, Scotland and England but also Europe and Asia Minor.  They had complex and varied groups of societies and religious customs which varied widely from group to group.

Because the ancient Celts did not leave many written records, much of our knowledge comes from second hand sources.  These include the writings of Greek and Roman observers and Christian sources.  These sources brought their own understandings, beliefs, prejudices and explanations to the information they provided.  Seen as “barbarians” by many of these of observers, the Celts were fierce warriors.  They were known as “quarrelsome”, “high-spirited” “proud” and “insolent” by some of their observers.  This they may have been, but they were also highly skilled artisans, miners, builders, farmers and merchants.

Much of their knowledge was passed down through the oral tradition …

To read the rest of this article please click on this link: Celtic

A witch dressed in all black sits in front of her altar, lit candles, bones, and a cauldron adorn it. She takes an athame and cuts open her hand to provide blood for her magic. Speaking an ancient language, she casts curses and hexes upon her enemies. – Now be honest, this is what you probably think of when you hear the word “witch”, most people and even Pagans are guilty of thinking this.

Sorry, my weeks start on Thursday when it comes to posting. This week I will be posting information about some of the Celtic Goddesses and Gods. Something to keep in mind when exploring Celtic Gods and Goddesses is the people who called themselves or where given the name Celtic in later years come from a wide variety of places stretching from Turkey to Germany and onto the what is now known as the British Isles (Wales, Ireland, England, and Scotland). Each of these tribes had a few of the same deities but sometimes known by different names and some of the Celtic deities were known only in a specific region.

Below is an article that was originally posted on APOLLO’S RAVEN Website: http://www.linneatanner.com/blog/celtic-gods-goddesses/

The ultimate adventure, when all the barriers and ogres have been overcome, is commonly represented as a mystical marriage of the triumphant hero-soul with the Queen Goddess of the World—Joseph Campbell

Previous posts on APOLLO’S RAVEN have provided an overview of Ancient Celtic religion and the pantheon of gods and goddesses. Although there are approximately 400 names of Celtic gods and goddesses which have been found throughout the vast area once inhabited by the Celts in Europe, from Ireland to Turkey, 305 of these names were inscribed only once. These were probably names of local deities. Only twenty names occurred with greater frequency and many of the Celtic gods and goddesses can be associated with Roman’s. The Celtic polyvalent deity did not have exclusive functions, but they were adept in all things. They also appeared in many polymorphic guises that included zoomorphic forms which combined human and animal attributes.

Below in an overview of Celtic gods and goddesses who were more widely accepted by the ancient Celts across all regions.

To read the rest of this article please click o this link: Celtic Patheone

Agate /ˈæɡət/ is a rock consisting primarily of cryptocrystalline silica, chiefly chalcedony, alternating with microgranular quartz. It is characterized by its fineness of grain and variety of color. Although agates may be found in various kinds of host rock, they are classically associated with volcanic rocks and can be common in certain metamorphic rocks.[1]

Wicca has changed a great deal from its founding in its modern form with the New Forest Coven.  Once, degrees and initiations were an essential part of the practice, but now, with solitaries and eclectics outnumbering most other forms of Wicca, such ways have been almost forgotten.  Most Witches today do not understand the purpose or need for initiations.  They tend to view them as excuses for “trad Witches” to be arrogant and hierarchical.  Unfortunately, even some initiated Witches seem to see it that way.  My background includes eclectic and solitary practice, as well as initiation in two very different traditions, so I thought I ought to take some time to explain what initiation and the Three Degrees of Wicca are all about.

Everything that is creative is spiritual. It can be argued that the reverse applies—everything that is spiritual is creative. Which isn’t to say that spiritual means religious, because that’s not it at all. Rather, creativity taps into something liminal; a venn diagram centered between reality and imagination and, when good, blends them into a seamless space.

Agathos Daimon means “good spirit” and is a religious observance held on the second day of each lunar month, immediately following the Noumenia.  It is the third celebration of a trio of household monthly observances.  A good spirit usually refers to a type of divine being that is less powerful than a God, is personal to each family, and can bring the family good luck, protection, or some type of assistance.  Household spirits are usually seen as either snakes or a s a young man with a horn of plenty in hand.

I celebrate the Agathos Diamon by pouring a libation to the spirit and asking for his continued blessings on our family.  If there is something in particular that our family wishes help with, I may give an additional offering to our family’s protective spirit.  Although I know I can always approach the Gods directly, the Agathoi Diamones are seen to be helpful intermediaries between the Gods and man.