When I was walking to work this morning I was thinking how quite and scary it was with all airplanes and helicopters had been grounded after the terrorist attacks on 2001. When I first came out of work that day it was so quite as many businesses had closed and people were in their homes filed to the television waiting for updates from the three places where the terrorist had crashed jetliner into buildings and the field in Pennsylvania where passengers lost their lives bring down the fourth plane before it could crash on to capitol hill in Washington DC. There were no tell take contrails from her exhaust and the silence was unnerving instead of golden.

This morning I looked up into sunny skies full of contrails saw and heard the jetliner and helicopters. I stopped midstep and have a prayer of thanks that I had not lost anyone I knew on 9/11/2001. Then asked Archangel Gabriel to wrap all those affected in a negative way to be wrap his warm wings of comfort and love.

it also got me to thinking while we as a nation have been sick a big point of drawing attention back to the catastrophic event 2001 under the guise of honoring all the people that lost their life that day, or later from injuries they had sustained at one of the crash site. What about those that have taken their own life over the last seventeen years because of survivor guilt and/or PTSD. The family member’s the media causes to relieve that day over and over again so we as a nation can claim we will never forget the terrorist actions on our soil. Why should many men, women, and children who lost a love one and/or friend on 9/11/2001 and are possibly still under  a doctor’s care for mental and/or physical or both things have to relive their nightmare they went and possibly still going through year after year? Please do not misunderstand me I respect and honor those who died that and the family and friends the left behind. I just personally think it is time for the families and friends who lost someone that day to be able to grieve in private and if they can live their private lives without the USA government parading in front of television cameras every year on 9/11for photo opportunities for the politicians.

Since 9/11/2001 many more men, womenwomen, and animals have been killed while serving in our military because of the horrendous crimes carried out on that date. Leaving behind even more people with PTSD and other mental, emotional, and physical disabilities. Which again includes their families and friends.

I mean absolutely no disrespect for the men, women, children, or those who care about them from 9/11/2001 to the military personnel still on active duty. I am just trying to say that we as a nation should respect what they are going through and respect their privacy. If you see anyone anywhere who has served or is serving in our military  go up to them and thank them for their service and the sacrifices their families and friends made when they were sent sent thousands of miles away not knowing if they would return home as the same person that left or in a body bag.

No matter what country you live please always remember to asked the Goddess and God to keep the men and women safe and to let them come home unharmed and not just those in the  military but first responders to emergencies where you live, this would include everyone from the person that answers the phone to dispatch help you, firemen and police officers also.

Thank you for your caring and concern for your fellow men, women, children, domestic and wild animals 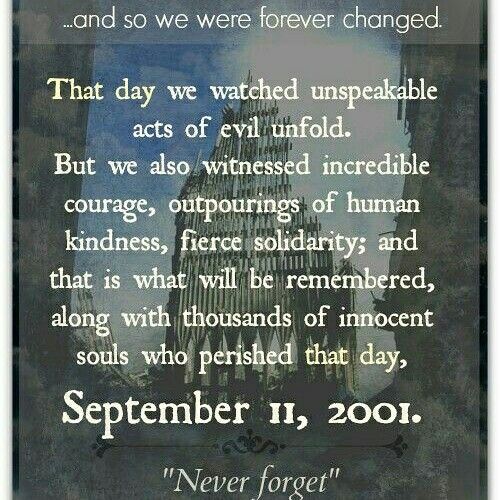 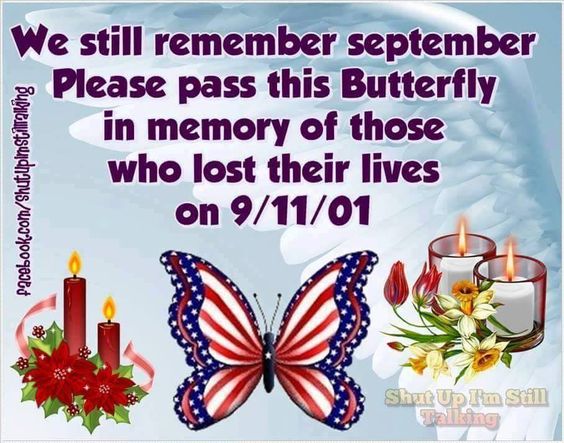 While a nation remembers all the people who crossed into the Summerlands from the Twin Towers in NY, NY, The Pentagon in Washington D.C.and in a field in Somerset County, PA on one of the most horrendous days in the United States history. The people left to carry on in this lifetime are often forgotten. Not just the people who got safely out of the Twin Towers but the families and friends of the spirits that crossed and families and friends of those who’s spirit and body lived on with the nightmare they escaped from dying in. Also the families of the terrorists that had no idea what those men were going to do that morning.

Say a prayer and light a candle both for those that crossed the veil and for those left behind. Find it in yourself to forgive the families of the terrorists who did not know what their sons did on that fateful morning that still lives on in our memories today and will for many years to come.

So I ask you to take at minute at the time of each plane crashed to remember the living and those that crossed into the Summerlands.

All times are given in the USA Eastern Time zone.

Times and locations of plane crashes come from this article:

Today
we come before you with heavy hearts
as we remember the events of 9/11.

For some of us
today is a mixed bag of emotions.

We are humbled by the bravery of the first responders.

North Carolina is in the direct path of Florence a category 4 hurricane. Florence’s effects, for example super heavy rains, causing the Atlantic ocean to have 15 feet or higher storm surges hit the coastal areas, ect are happening as I write this.

I ask anyone reading this to pray for the safety of those living in these states and for the first responders who are working around the clock to keep others safe. Also for all the pets and wildlife being effected by the winds and water hurricane Florence is causing.

Hekate and Pan be with the humans and animals to get them to safety.

Hekate and Pan keep all those in the path of and fall out from the hurricane called Folerence safe.

Archangel Micheal stand beside and protect the first responders and members of the Nattional Guard that are being sent in to help people escape the hurricanes fury.

So note it be.